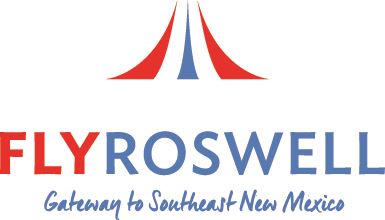 The Roswell Air Center is one of the largest commercial aviation industries of the southwest. The air center hosts flights from ROW (Roswell)  to DFW (Dallas-Fort Worth). To learn more about flights and business properties click here.

NOTICE
Federal law requires wearing a mask while in the air center terminal and on aircraft. Failure to comply may result in denial of boarding or removal. Refusing to wear a mask is a violation of federal law; passengers may be subject to penalties. Thank you for your cooperation.

The Roswell Air Center is located five miles south of the central business district of the city and is the core of southeastern New Mexico’s industrial activity.

Walker AFB was named after General Kenneth Newton Walker, a native of Los Cerrillos, New Mexico. He was killed during a bombing mission over Rabaul, Papua New Guinea on January 5, 1943. Though intercepted by enemy fighters, his group scored direct hits on nine Japanese ships. General Walker was last seen leaving the target area with one engine on fire and several fighters on his tail. For his actions, General Walker was awarded the Medal of Honor posthumously by President Franklin D. Roosevelt in 1943. The base was renamed in his honor on January 13, 1948.

In 1966 the Air Force announced that Walker AFB would close. This was during a round of base closings and consolidations as the Defense Department struggled to pay the expenses of the Vietnam War within the budgetary limits set by Congress.

RIAC is also known for the Roswell UFO incident, an event that allegedly occurred on July 4, 1947. It is alleged that a "flying disk" crashed during a severe thunderstorm near RIAC at Corona, New Mexico.

The site was used for several years to launch stratospheric balloons for Air Force projects.

The airport was used by Felix Baumgartner to launch his record-breaking freefall jump from the stratosphere on October 14, 2012.