“Her art is characterized by refreshing honesty, personal reaction to everyday scenes, an instinctive sense of design, and sensuous tactual attribute.”

Agnes Tait was born on June 14, 1894 in New York City. Showing adept artistic talent at an early age, she applied to and was granted admission to the National Academy of Design at the age of only fourteen. Due to the deaths of both of her parents, her mother in 1913 and her father in 1919, it took her approximately one decade for her to complete her studies at the Academy.

Tait sought to continuously improve her artistic skills and completed a course in lithography at the École des Beaux-Arts in Paris in 1927. She was also tenacious in advocating for herself. For example, in 1928 she not only gained representation from the Cooperstown Art Association, but she also secured her first solo exhibition at Dudensing Galleries in New York City and was included in the Art Institute of Chicago’s first Annual Exhibition of American Paintings and Sculpture. Tait’s “The Bride” was selected for this exhibition on display October 25-December 16, 1928. An image of this artwork was also reproduced in Chicago’s Evening Post with the caption “a picture accorded much popular admiration in the recent American show at the Art Institute.”

A commonality between Agnes Tait and the Roswell Museum is our shared connection to the Works Progress Administration (WPA), a US federal government agency designed to support the arts during the Great Depression. The creation of the Roswell Museum was financed, in part, from WPA support as a federal art center in 1937. By then, Tait had already been contracted by the WPA as an easel painter depicting everyday American life. What is widely considered her most famous work of art, Skating in Central Park, now in the collection of the Smithsonian Institution, was completed while Tait was working for the WPA.

In 1941 Tait relocated to Santa Fe, New Mexico where she would reside for the rest of her life. In her time, she had a successful career as an artist with several solo exhibitions, mural projects, book illustrations, work for publications, and portrait commissions. “I kept very busy painting children’s portraits in and out of state,” Tait said. “Often I traveled by bus and would be so exhausted after I finished a portrait that I would plead with the family to let me go to bed. They’d almost take it as an offense that I wanted to be by myself. Nobody knows what being an itinerant portrait painter can be. I certainly didn’t have to seek people out; there were always some clamoring to have their children painted. I never could raise the prices. Some[one] started saying that Agnes Tait was the poor person’s Henriette Wyeth. She was charging hundreds while I was charging in the fifties for watercolor portraits. The most I could ever get was $500. After I’d return from a trip thoroughly exhausted, I would always say that I wasn’t going to paint anymore portraits. But then some tempting offer would come along and I’d give in.”

In 1945, four years after relocating to New Mexico, Tait had a solo exhibition at the Ferargil Galleries in New York. This exhibition received a range of critical responses. The critique from Art News included “This miscellany of landscapes, local scenes, and studies of animals is uneven in skill and on different levels of perception. Evidently Miss Tait is seeking to expand by experimentation, both her technique and subject matter. Some of the experiments misfire. At her best, she captures… the character of the region around Taos and Santa Fe, and gives us in a half-naturalistic, half-romantic style the subject’s charm.” Alternatively, The New York Herald Tribune said Tait’s “watercolors are neat, meticulous and luminous studies of adobe and desert... Because she does trees with particular success and feeling, the best of her works are usually those which have some blossoming verdure in them.”

A keen perceiver of the world around her, Tait traveled extensively around the world, often depicting what she encountered through the mediums of oil and watercolor painting, lithography, and drawing. She had a particular fondness of animals. During the 1940s to 1960s as she took care of her ailing husband, William McNulty, and sister, Anita Tait, before each passed away, Agnes Tait found solace in painting portraits of cats.

Tait died on August 23, 1981 in Santa Fe. At that point, independent curator Lydia Peña had already been researching the life and work of Agnes Tait for years in the hopes of broader public awareness about what she considered an underappreciated artist. Peña wrote her doctoral dissertation on Tait and hoped to stage a retrospective exhibition. After years of frustrating interactions with a museum in Santa Fe that had previously mounted solo exhibitions of Tait’s work, it became clear that institution would not host this retrospective.

Through a professional affiliation, Peña was able to secure gallery space at the Arvada Center for the Arts and Humanities in Colorado, but the project seemed incomplete without a venue in New Mexico. Through multiple connections, including Susan Cooper, Roswell Artist-in-Residence 1972-1973, and Alice Gunter, friend and long-time collector of Tait’s work who lived in Carlsbad, New Mexico, the Roswell Museum became the second exhibition venue of the artist’s retrospective April 1-May 20, 1984.

Many of the works in the 1984 retrospective were loaned by George & Alice Gunter. Given that the Roswell Museum participated in this traveling exhibition and given the proximity of Carlsbad, where the Gunters lived, to Roswell, the Gunter estate recently made a large donation of artwork, mostly of art by Agnes Tait. Thirty-eight years after that 1984 retrospective exhibition, and forty-one years after the artist’s death, we invite you to revisit the life and work of Agnes Tait. Special thanks is owed to Roxanne Gunter and Laura Loos for their facilitation of this extremely generous donation of artwork by Agnes Tait. 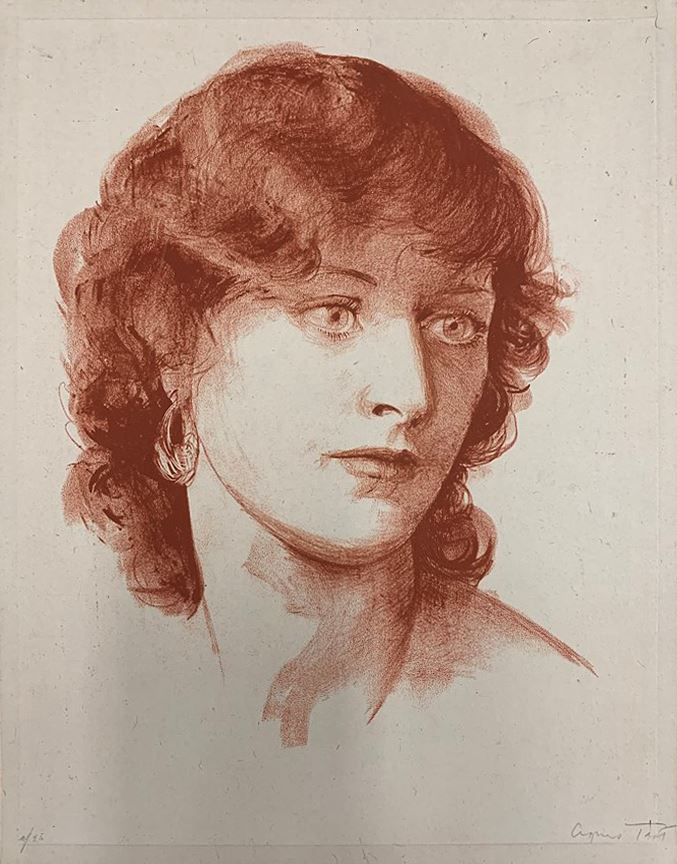 Agnes Tait, Self Portrait, 1934, Lithograph on Paper, Gift of the Estate of George & Alice Gunter 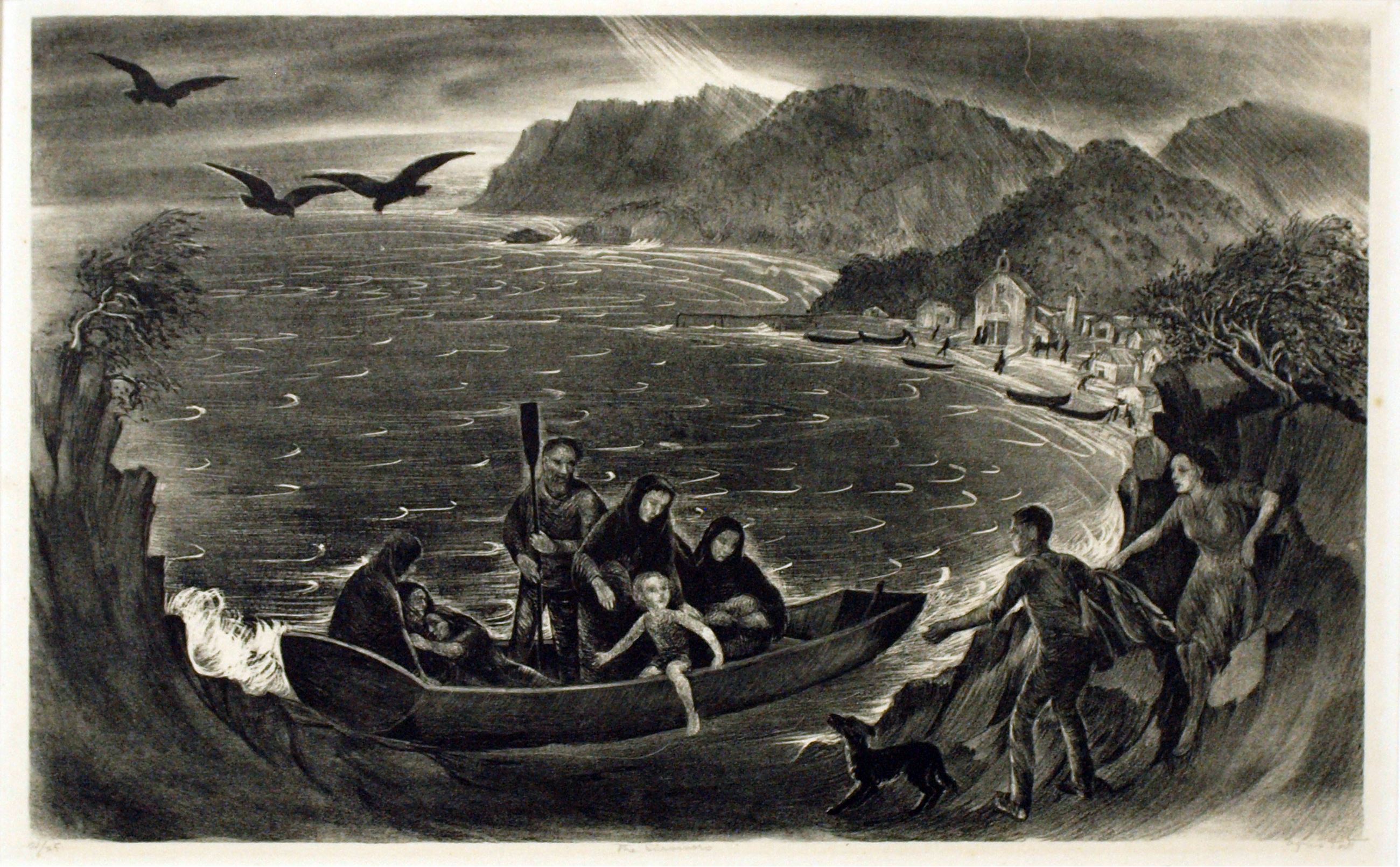