A Lasting Legacy: 85 Years of the Roswell Museum

As part of the national effort to increase jobs across industries during the Great Depression, the Works Progress Administration (WPA) developed the Federal Art Program (FAP) in support of the arts. Over the 8 years of the program, 1935-1943, a significant body of public art was commissioned and approximately 10,000 artists and craft workers were supported.

In addition to art production, approximately 100 community art centers opened nationwide with federal assistance. The Roswell Museum project was conceived by the Chaves County Archeological and Historical Society, who had outgrown their displays at the local Carnegie Library. With approval to build on City property, the Society submitted an application to the WPA and subsequently raised $1800 in matching funds to cover the costs of building materials, while the WPA covered the labor.

Local architect Frank Standhardt modeled the museum’s design after Pueblo- and Spanish Colonial-style architecture, while the furnishings were made on site by FAP artisans and included handcarved corbels, grills, doors and moldings which were replicas of features from the Sanctuario at Chimayo, the church of Trampas, the San Miguel church and examples from private collections. The tin chandeliers and other lighting fixtures were made by  Margery Parrish and Eddie Delgado. A hand-embroidered stage curtain, produced by the National Youth Association, adorned the stage in the main gallery until the late 1950s/early 1960s.

The Roswell Museum Federal Art Center opened on October 6, 1937. It was dedicated in honor of the pioneers of the Pecos Valley, including one of the Museum's founders, Amelia Church. FAP traveling exhibitions filled the main hall with new shows arriving by train about every 3 weeks. Free art classes were complemented with lectures, music and poetry readings by local and traveling FAP artists.

The FAP’s traveling art exhibitions left little room for the Society’s displays, causing friction that eventually led to the City ending the property lease in 1941. After a few years of struggle as a City museum, a turning point came with the donation of 41 Peter Hurd lithographs in 1947 which resparked the community’s interest and cemented an art focus. By 1950, a new City administration, changes in the museum board and staff, and additional allocations of funding sparked infusions of vision and resources that set the stage for decades to come.

We invite you to celebrate the Roswell Museum’s 85th anniversary with the new exhibition, A Community Legacy, this fall, and be sure to drop in for a slice of birthday cake on October 6! 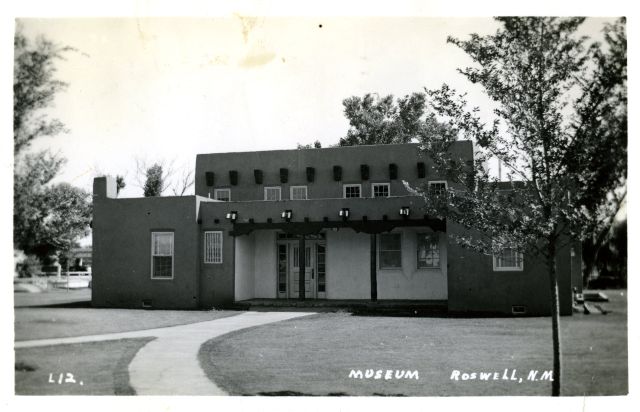