Fritz Scholder: Focus on the Figure

Interdisciplinary artist Fritz Scholder (1937-2005) grew up in Breckenridge, Minnesota. Scholder’s ancestry was predominantly European with only 25% being Native American through his father. He was formally enrolled in the California Mission tribe of Luiseños called the La Jolla Band of Luiseño Indians. “Being one-quarter Luiseño Indian,” Scholder has said, “I have a unique perspective. I am a non-Indian Indian. I do not feel the pull of the dichotomy of two cultures. However, I am aware of [their] incongruous nature.”

In the late 1950s Scholder moved to Sacramento, California where he was mentored by the Pop painter Wayne Thiebaud. Due to the combination of early career acclaim and his membership in a Luiseño tribe, Scholder received a unique invitation in the early 1960s to participate in the Rockefeller Foundation-funded Indian Art Project at the University of Arizona in Tucson. Scholder received his MFA in 1964 and from 1964 to 1969, he taught at the Institute of American Indian Arts in Santa Fe, New Mexico. The areas of focus of his work at this time were predominantly abstraction and landscape. Scholder reportedly initially discouraged his Native American students from anything he even remotely viewed as traditional “Indian art.” It is clear, though, that, over time, Scholder was influenced as much by his students as they were influenced by him. By the time of his solo exhibition here at the Roswell Museum from December 8, 1968 to January 9, 1969, Scholder’s paintings shifted to predominantly focus on the figure.

Starting in the late 1960s, Scholder became best known for his portraits of Native Americans. On display here are 23 lithographs from the Roswell Museum’s permanent collection: 5 group portraits and 18 portraits of individuals. Throughout his career, Scholder sought to deconstruct the romanticized stereotypes of Native Americans and re-present them in more realistic terms. As Janet Berlo and Ruth Phillips described Scholder’s work in Native North American Art in 1998, these portraits elicit “the psychic cost of the gap between romantic and backward-looking stereotypes of Indians and the actualities of their daily lives.” The candid nature of Scholder’s portraits shocked all audiences. About Indian with Beer Can (a painting not included in this exhibition, but similar in subject matter to Indian at the Bar, a lithograph displayed here) that publicly confronted the issue of alcoholism in Indigenous communities, Smithsonian curator Lowery Stokes Sims has said “It’s easily the greatest and most influential painting in the history of Indian art. The picture blew a hole right through the viewer’s head, and the holes were different depending on who you were. To the traders in Santa Fe, it was an unspeakable travesty. Most Indians hated it, and… many still do.”

About his intentions to highlight contemporary Native American realities Scholder has said “People don’t really like Indians. Oh, they like their own conceptions of the Indian – usually the Plains Indian, romantic and noble and handsome and somehow the embodiment of wisdom and patience. But Indians in America are usually poor, sometimes derelicts outside the value system, living in uncomfortable surroundings. We have really been viewed as something other than human beings by the larger society. The Indian of reality is a paradox – a monster to himself and a non-person to society.”

In 1970 when the Tamarind Institute moved from Los Angeles, California to Albuquerque, New Mexico, Scholder was invited to be the artist to create their first major project. The result was Indians Forever, a suite of 8 lithographs by Scholder, all of which are included in this exhibition (Buffalo Dancer, Indian at the Bar, Indian at the Circus, Indian with Feather, Indian and Pigeon, Indians with Umbrellas, Pueblo Dancers, and Waiting Indian). This project was Scholder’s first introduction to lithography.

The 1975 lithograph entitled Bicentennial Indian is a portrait of a Native American man sitting down with an American flag across his lap. Scholder was one of 12 artists commissioned to create prints comprising the Kent Bicentennial Portfolio celebrating the 200th anniversary of the Declaration of Independence in 1976. The Portfolio was printed in an edition of 125 and given to museums across the United States, including the Roswell Museum. Each artist was asked to respond in any way they wished to the question, “What does independence mean to you?” This print is Scholder’s response to that question: re-contextualizing the iconic American flag by associating it with a representation of Indigenous peoples forcibly assimilated and relocated or murdered in the name of white colonial “independence.” 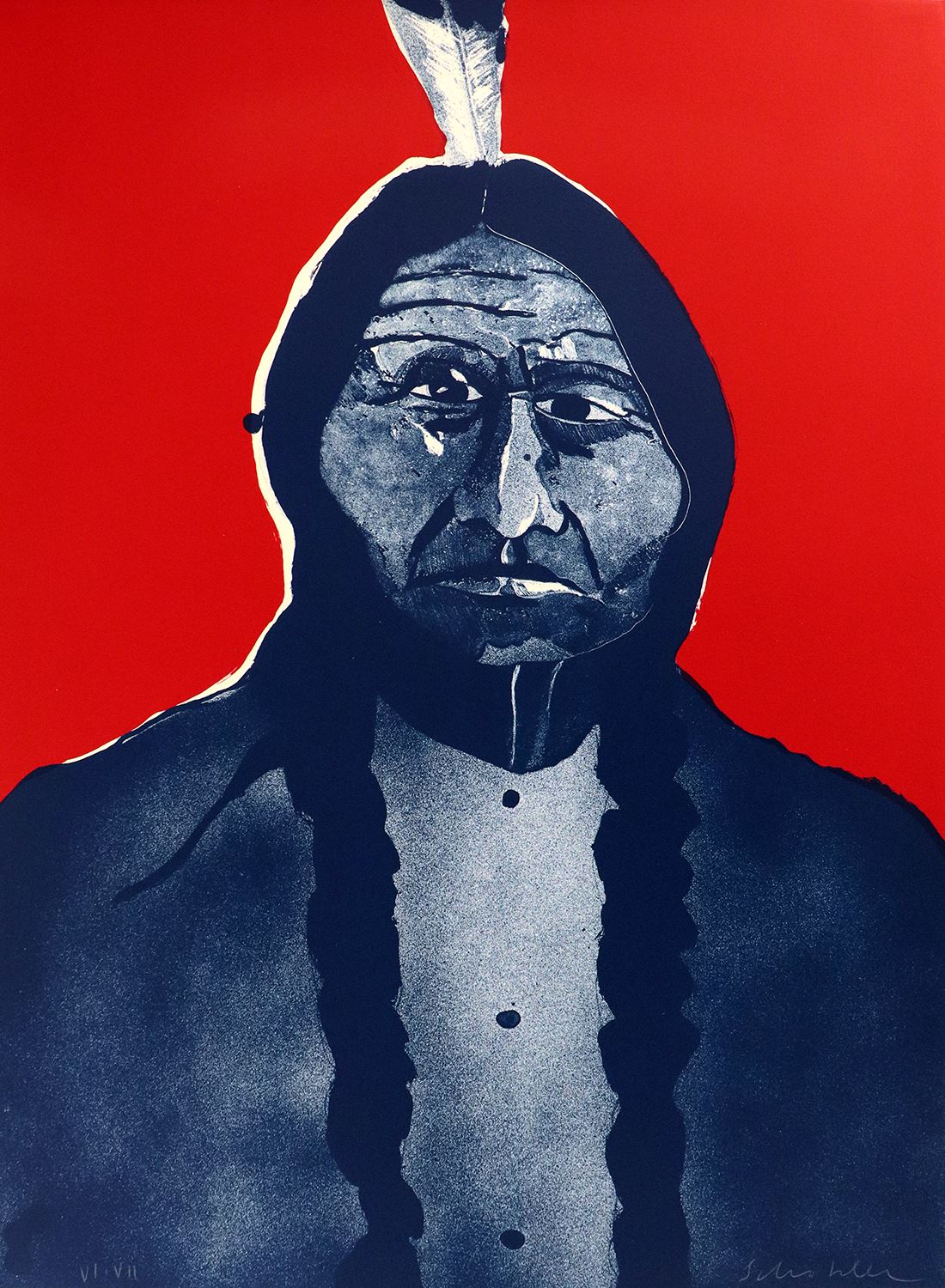 Fritz Scholder, Portrait of an American #2, 1977, Lithograph on Paper, Gift of Ben Q. and Yoshiko Adams. 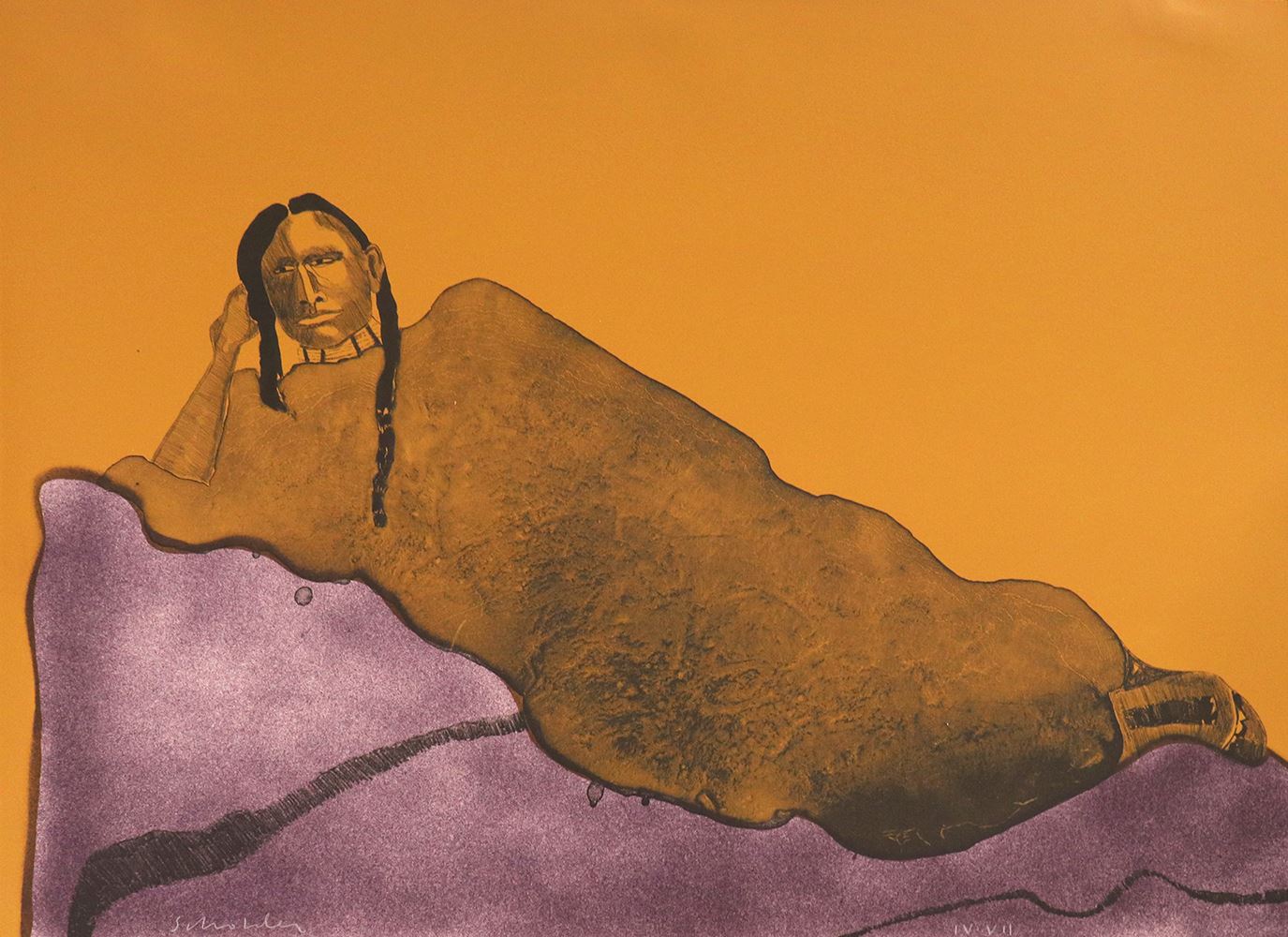