Thanks to the popularity of Game of Thrones, a lot of fiction novels and series are not just being adapted into movies, but into dedicated television shows, as well. Some do their best to remain faithful to their source material, others…not so much. While this doesn’t necessarily make one option good and the other bad, it does mean it’s worth exploring both formats, especially if you enjoy the basic story.

“American Gods” by Neil Gaiman follows Shadow, recently released from prison after 3 years from being convicted of armed robbery. At the last minute, he finds out his old life that he was looking forward to returning to is gone, thanks to a car accident that claimed the lives of his wife and best friend. He’s approached by a man on his plane ride home with a job offer and after some unusual events, Shadow accepts. The title is straightforward. This is a book about the gods that reside in America. Either brought here from older countries and far flung travelers or newly created from to govern modern affairs such as media and technology.

Where Gaiman always shines as an author, however, is by weaving stories within the stories. There’s the overarching tale of Shadow and Wednesday’s trip across the country to seek out the holy places that disguise themselves as roadside attractions and tourist traps, but there’s also the stories of the people who believed the gods into existence, how these gods manage to live in this current world, Shadow’s coming to terms with his past, future and (sort of) dead wife.

The book is less glamorous and more toned down than its TV counterpart, but there’s something much more engrossing about just following two people going on a low-key adventure across the country, gathering resources for an upcoming “storm”. Getting to know the interesting human characters they encounter, as well as how Gaiman envisions mythological beings makes the eventual outcome secondary to the joy of just being along for the ride. “American Gods” can be found in Adult and Spanish Fiction. 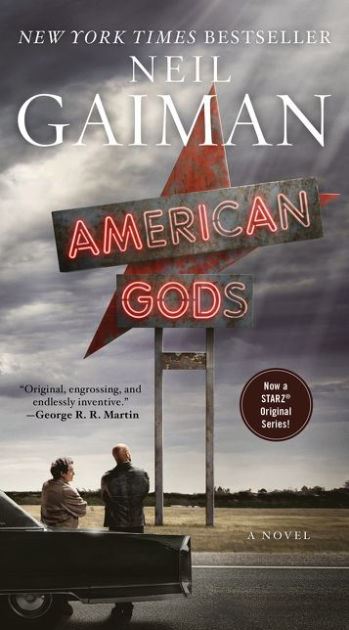