“The Informers” by Bret Easton Ellis is a set of short stories set in California during the early 1980s. “The Informers” is a look into the lifestyles of the rich and somewhat famous. Their decadent lifestyle is examined, along with a carefree attitude of the lives of the different characters portrayed in the book. Their lack of caring and emotion goes along with the old adage that appearance is everything, because outside of that, these characters have little to nothing to show or add to society.

The book does not have a main protagonist, but instead each chapter centers on one particular person. Some of these characters interweave and reemerge in the storylines of other chapters throughout the book. Some of the stories told are glimpses into a day of the life of wealthy families and people of California such as college students, ex-wives, bored housewives, business executives, television personalities, musicians, and more.

The stories are very detailed, and in similar fashion to another of Ellis’s books, “American Psycho”, the description of designer clothing, exotic cars, and fancy restaurants are written in great depth giving a visual cue into the settings. Many of the stories involve serious issues, but other materialistic and self-centered issues seem more important to the characters. The coping of a death of friend takes a backseat to what the friends are planning to do after their dinner. The transformation of a 20 year-old from a homely college student to the stereotypical California girl is described in one of the chapters through a set of letters to a friend. The death of a young man’s father has no effect on him. Even a trip to visit the plane crash site, the cause of death for his father, makes no impact whatsoever on the boy. Instead of grieving with family over a lost family member, he deals with it in his own way, which is gambling in Las Vegas and in the end gambles away his father’s ashes on a game of blackjack.

“The Informers” takes a peek behind the curtains of the wealthy and reveals the decadence and decay of society, morals, and decency. When a person has everything they could ever want at the tip of their fingertips, the once sought after goals and prizes becomes mundane. Things that were once new and exciting suddenly become a normal way of life for the characters portrayed by Ellis. The search for the new things that excite these people leads to new questions of what they are willing to do to find that excitement again and what their conscience will allow them to do to gain it. This book, along with other books by Bret Easton Ellis, are available in eBook format through Overdrive or Libby. 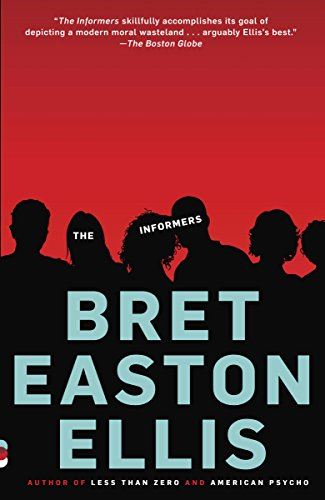