“According to The Nice and Accurate Prophecies of Agnes Nutter, Witch, (the world’s only completely accurate book of prophecies, written in 1655, before she exploded), the world will end on a Saturday. Next Saturday, in fact. Just before dinner.” This quote from the publishers of Terry Pratchett and Neil Gaiman’s classic collaboration sets the stage for a thrill ride culminating with the end of the world that will keep you on the edge of your seat or falling on the floor laughing from the beginning of the book to the last page.

With the planned release of a BBC-produced series based on this classic book coming out in 2019, I thought it would be a good time to re-read this classic story. From the very beginning, you will see that this reinterpretation of biblical events is told with a wink and a grin.

At the start, an angel named Aziraphale and the demon Crowley (formerly known as Crawly as he was the snake that tempted Eve with the apple in the Garden of Eden), both of whom are not really exemplary examples of their respected stereotypes, strike up an unusual acquaintance after the events in the Garden of Eden, which transforms into a very unusual friendship over the course of time. As events are leading up to the last days as prophesied, these two friends are caught up in events which they really do not want to happen, seeing as they have both lived among and become very fond of the human race. Aziraphale and Crowley hatch a plan to keep an eye on the Antichrist and guide him to neither stray too far in either direction, good or evil, delaying the end of the world.

But, as the end of the world comes closer, they realize there has been a mistake. The antichrist was mistakenly switched with the wrong baby at birth. Instead of growing up as the child of American diplomats in the lap of luxury, groomed in the use of power, he was given to a nice couple in Lower Tadfield in England. With the Four Horsemen gathering and apocalyptic events being set into motion, can Aziraphale and Crowley find the Antichrist? And even if they do, what decision will this 11-year-old boy make? 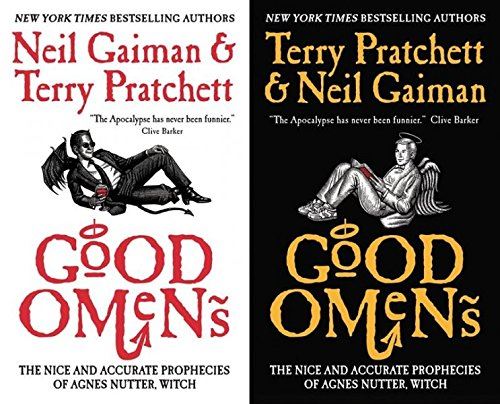