“Outlaw Tales of New Mexico: True Stories of the Land of Enchantment's Most Infamous Crooks, Culprits, and Cutthroats" - Barbara Marriott

New Mexico has a long and rich history full of many cultures, customs, and peoples. However, not all of those different casts of people in New Mexico history have had a positive impact on society. Barbara Marriott tells the tales of some of the more unsavory characters in our state’s history in the book, “Outlaw Tales of New Mexico: True Stories of the Land of Enchantment’s Most Infamous Crooks, Culprits, and Cutthroats”.

The book contains chapters of stories about some of the more well-known characters who had some part in New Mexico’s history such as Billy the Kid, “Dirty” Dave Rudabaugh, Pancho Villa, and many others. Then there are those who might not be as famous as those mentioned, such as Vicente Silva, or as he is referred to in the book, Vincent Silva.

Vicente was a well-known saloon owner in Las Vegas, New Mexico. Even though he was viewed as a respected family man in the community, he led a very different private life. Silva was part of a group known as Las Gorras Blancas, or the White Caps. Depending on your point of view, either this group of people were heroes to the community by fighting the American expansion and takeover of lands that New Mexico families had held for centuries, or they were a menace to society causing trouble and partaking in illegal activities. After one of the founders passed away, the group somewhat disbanded, but instead of fighting for the community Silva and his own group that he put together, began to take on underhanded and illegal activities to further his gang and himself.

When there was a sense of betrayal within the ranks, Silva ordered that the man, Patricio Maes, be put on trial and bribed the jury with whiskey to gain a penalty of death. Maes was then hanged and his body was left swinging off a bridge for the town of Las Vegas to see the next day. After this trial and mounting evidence into the man that Silva really was, Silva went into hiding. His plans were to escape to Mexico with his mistress, but he also wanted to bring his daughter who was with his wife, Telesfora. As you might expect, his escape did not go as planned. Telesfora and her brother Gabriel, who had been protecting his sister, both met tragic ends at the hands of Silva. Silva then met his own tragic end by his gang turning on him after they witnessed him murdering Telesfora and felt disrespected by the low amount of money they were offered for their help and silence in the matter. To read more about these legendary locals “Outlaw Tales of New Mexico” is available to check out in the Adult Non-Fiction section of the library under call number 364.109788 M349O. 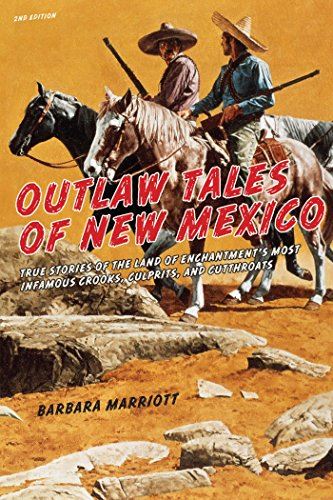