The Sea Tiger stands magnificently regal upon a sunken ship’s crest as he waits patiently for small fish to wander into his open jaws, a scrumptious lunch delivered by sea. Bold, black stripes adorn his tawny body, yellow eyes light up as he engages his best friend, Oscar, in a game of sea exploration. Oscar is a small and timid mer-boy who loves his best and only friend, Sea Tiger. Their days are spent swinging upon seaweed, racing through rocky crevices, riding seahorses around a seashell carousel, and finally, falling exhaustedly to sleep. At least until Oscar awakens and, shivering from fear, thinks there might be monsters lurking close by, upon which Sea Tiger rises in all his fearsome glory and ROARS the monsters away!

Although their days are happy, Sea Tiger realizes it is good to let others into your life, and knowing that shy Oscar will always follow him anywhere, sets out one day to make new friends. The sea is full of abundant life, and soon, to the lilting music of sea turtles, they meet a jasper-colored lion and his best friend. A fun, fulfilling life begins among new friends as they rise to the surface of the sea to watch the stars glow against the night sky.

Victoria Turnbull won an Association of Illustrators New Talent Award for the imaginative creation of “The Sea Tiger”, her debut picture book, and it is highly deserved. “The Sea Tiger” can be found in the J-Easy section of the Children’s area. 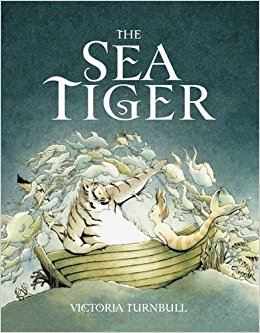