In a future where the first interstellar war has just ended, the economic situation on earth is going down fast. Even though they stopped the secessionist in their bid to break free of earth’s unified government, the cost may be more than most can stand. Adda and Iridian have just graduated with engineering degrees, which are not worth the paper they are written on in the current job market. With their outlooks for making a living looking bleak, and desperate to secure a future for themselves, they hijack a colony ship with its load of luxury goods that was intended to set up its rich hibernating passenger on a new planet.
After taking control of the ship and getting the crew and passengers to evacuate, Adda and Iridian head for Barbary Station to present their prize as payment and get on with the pirates who are supposed to be living in luxury on the station. When they arrive at the station, their hopes are quickly dashed as they find out that things are not as they had been lead to believe.
The station is controlled by a killer Artificial Intelligence, intent on eliminating everyone on board and not letting anyone leave. The pirates are just hanging on, living in welded-together scrap shelters on the outside of the station. With no safe harbor and no way back, Adda and Iridian have only one choice. They must destroy the rogue Artificial Intelligence. With the pirates taking bets on how they will die, Adda and Iridian set out to beat all the odds and earn themselves a future or die trying.
With this first installment of the new “Shieldrunner Pirates” series, R.E. Stearns has created a bold new world which I am looking forward to exploring in her next book. If “Barbary Station” sounds good to you, stop by the Roswell Public Library to check it out. While you are there be sure to check out the rest of our new Science Fiction books, including installments from several of my personal favorites such as J. D. Robb, with her new book “Dark in Death” and the exciting book “Iron Gold” by Pierce Brown. Or you can go with something written by a new author like “Barbary Station” though my personal pick for my next read is “Black Star Renegades” by Michael Moreci. So no matter what you are in the mood for, we have you covered. 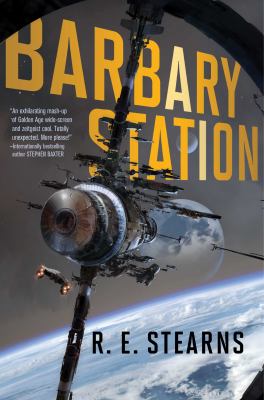